What is the need / problem ?

It is well documented and understood that we have a ‘discovery’ problem - now that we have quite a lot of enterprises on OFN, it is very difficult for eaters (or other enterprises) to find and connect with appropriate enterprises. This problem and some potential solutions have been periodically documented in:

As discussed in the threads above, it is also clear that the map has potential to improve this situation, possibly with some small tweaks.

Currently (July 2020) there are two major considerations in doing any work on the map page:

However, a wonderful volunteer has popped up with skills and enthusiasm to work on this area - (@jules) - so can we agree some quick wins that move things forward . .

Who does it impact ?

What is the current impact of the problem ?

We are limited in our ability to market to Eaters as we can’t send them to OFN and be confident that they will find what they need. Producers are limited in finding Hubs they might connect with and vice versa

What is the benefit of focusing on this ?

Potential solutions that will solve the problem ?

3. More significant changes, but perhaps could be done within current page design

Selection of a feature candidate

Suggest Jules investigate 1. and report back on her thoughts, including wisdom of implementing 2. within google or just go to OSM

Metrics to measure if need is satisfied after feature is implemented

Events on map page that tell us how many people:

Quick note on the OSM version: it currently only searches by enterprise name, and not location, which is the opposite of the Google version. The rough roadmap for improving it includes customising the search functionality to include locations, so we can probably have both.

Hi there
I’m a little confused by the website- I work on websites so I hope this helps too! I live in Wonthaggi it says there’s a shop which is closed and it’s not clear if I have to choose a location To pick up or can have delivery- Helpful is steps. Eg Step 1 choose delivery or pick up. Step 2…so I’m not clear whether my location defines what I can buy. Then I want to shop. Perhaps I’ve just not looked at the site for long enough. When I type in location it says closest place is kongwak but doesn’t confirm if that’s where I would pick up from. I’m keen to shop and am happy to drive a distance to pick up. Can I sort by product rather than scrolling through lists? I’m on a mobile.
Thank you
Jo

Hi all, just an update (please let me know if this is the wrong place, or to correct me on anything, as I’m still getting oriented). I talked with @Erioldoesdesign about the high-priority map issue, which seems to be producer-input addresses either not appearing on the map or appearing inaccurately. In talking, we came to the thought that in the producer registration process, it would be helpful to have some sort of feedback step (in real-time, on the first producer registration page as they enter the address) about whether the address the producer is entering can be placed on the map, and if it can, whether it’s accurate. We had the idea of a small map, with the geocoded address (based on their inputs so far) appearing, and a checkbox so the user can indicate if it appears to meet their expectations. I’m wondering maybe we could start with an even smaller first step, and have just text saying something to the effect of either “Is this your address: ___?” or some kind of dropdown with a few options, and it would be the geocoder’s guess of what address they’re looking for based on the inputs they’ve entered (similar functionality to the input on the map itself but I’d stitch it together from the separate address inputs), or if the geocoder couldn’t find it, to say something to tell them that their address in its current format can’t be found on the map. Then either way, get them to check the box to say, ‘yes, the geocoded address looks right’ or no, either it couldn’t be geocoded or they didn’t like their geocoded options. And then from there, the map could be added and the checkbox would retain its same meaning.

If they confirm/deny the address looks correct, we’d want to store that boolean (true/false) in the backend and perhaps not try to show those producers with unverified addresses on the map. If they have confirmed the address, we may want to store the location in a new field in some map-friendly way, like coordinates.

Does this make sense? If so, do you want me to attempt it as an experiment? I’m not sure how far I would get with the backend portion… tbh even the front end takes a lot of translation for me since I’m used to angular 9, react, SPA, etc. but I think I can sort that out. Does anyone know of a backend dev who could collaborate with me on a branch? Sorry if these are naive questions, just processing a lot of info and trying to figure out how to tackle this. If there’s still too much uncertainty or we want to wait on design decisions, I can chip away at smaller pieces like the map display itself, or any other bugs.

I’d be happy for you to give this a go. I wonder if it might be worth reaching out to / pinging cillian on slack - he’s the one who’s been picking up map issues and might be willing to work with you on this?

Thanks @Kirsten! I’ve slacked Cillian, and will start playing around with a simple proof of concept of this now. When I have something, I’ll maybe share a video so people can see if we feel like we’re on the right track.

A feature I love when I’m searching and shopping on other sites is when the site already knows my location and shows me - by default - the stores (or whatever) closest to me, but also gives me the option of choosing a different location. Wouldn’t it really simplify things for the user if they didn’t have to type any address in the ‘shop now’ page because when they first approach OFN, it would show them the open and closed shops (and groups I’d argue) closest to them?

I would love to start offering logged in users the ability to ‘save a location’ or ‘Add their home address’ and have OFN remember this when the shopper searches.

Some websites do this thing you might notice in the place where you type the URL it might ask you to ‘allow’ access to your location GPS data. On mobile it looks like this: 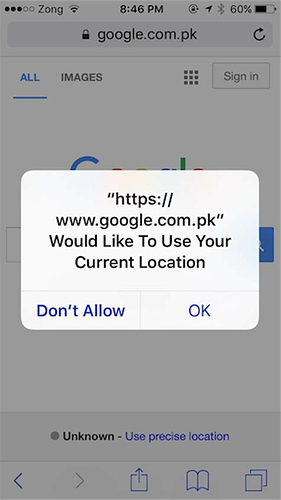 Would love to explore this some day

Hey @julia.e.carney I know I promised you some design ohhhhh about 4 weeks ago.

Just saying I haven’t forgotten and if you can see this figma file:https://www.figma.com/file/YFTgvJVs2njv7644gNrtMi/Producer-registration.?node-id=0%3A1

You can view progress and if you wanted to sync up again on maps etc. we totally can.

Hi @Erioldoesdesign, thanks, this is amazing timing actually, as I just got some functionality (without ux/design) working last night, and was about to touch base with you this very day. I can’t actually see the figma, you may need to please give me permissions. My github account is here, don’t know if you can do it that way, or even if you have some kind of sharable link? https://github.com/julesemmac. You could use my email julesaccts@gmail.com too if that’s easier.

hey @julia.e.carney - just on a call about OFN in Latin America and looking at the map in Brazil and they have one of these cases of an enterprise randomly in the middle of nowhere - I think - it might be that there is a producer on this little island. Perhaps worth checking with @thomaz and @rafael . . it does seem that they are having address issues . .

Hi @Kirsten! Sure, I’ll check in with them, thanks!

Finally done some vol work on this and opened up the Figma link for you to view: https://www.figma.com/file/YFTgvJVs2njv7644gNrtMi/Producer-registration.?node-id=0%3A1

Sorry for the delay!

Thanks @Erioldoesdesign, this looks great!