What is the need / problem

The Notify Producers button was created as a quick way for hubs to notify their suppliers of what items were ordered from them in an OC. There’s a model in Australia (Prom Coast) where this would be a very handy feature, BUT in this case the suppliers take responsibity for packing items by customer. The Notify Producers email currently only contains the items ordered and the total QTY. This hub needs this to be broken down by customer. Could we have an option for the email to include customer details?

Who does it impact

Hubs who have many suppliers to communicate with, and when those hubs need to pack by customer. Another Aus example that could use this tool is the Farmer’s Market pre-order shops.

What is the current impact of this problem

Here’s an example of the Notify Producers email as it currently stands. 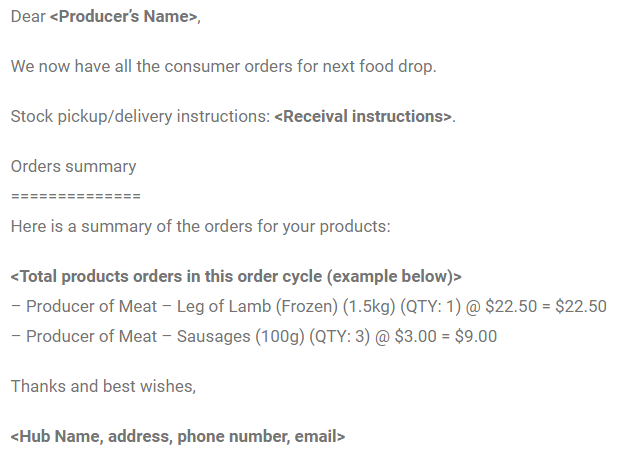 Just echoing this need riased by @sstead. Meet @CLFC (Chris), he is becoming our OFN-CAN ‘power user’ in Northwest Ontario and starting to onboard a large complex food system (set of hubs). In that system, producers pack orders by customer name. So - right now, as @sstead notes, the ‘notify producers’ feature is useless to them. They need to know who ordered what. @sstead - has this been moved to ‘icebox’ yet? I couldn’t find it. And also - have you found a work-a-round for now? Other than the hub manager editing csv files and sending to each producer, the only other possibility I see is making all suppliers managers for the hub so they can go in and pull their own packing lists (but that of course carries the risk they could accidently change something they shouldn’t. )

Right! This is it exactly. What could be an easier functional workaround (I can’t really say, not being a Ruby coder … I’m a PHP guy) is to give producers permissions to see the names of the people ordering from them through a hub in the Pack by Customer report. Right now, what they see is this:

Reports - Packing by Customer.png968×251 19.7 KB
If they could see the code, first name, and last name fields in that report, we’d be alright.

This becomes more problematic when dealing with exact weight/volume products, like meat, that would be invoiced at a specific price to a specific customer, before they collect their orders from us. Without that data, our hub volunteers would have to go through invoices individually to find the right product and price, vs. placing the labeled products in the named bins.

How hard would it be to let hub suppliers see the names of those who ordered their products in the packing report?

Hi there @tschumilas @CLFC - this is row 62 in the giant roadmap spreadsheet of all things. I just checked and it didn’t have any votes in the last round, also the only named user who wants it is Epicentre (Fr). Should I add your Hub and Canada as interested?

and also, there are revisions to the voting process going forward so I think you will be able to allocate some Canada votes for your priority features

We need to knock off that report which you got in in this round though first!

yes - add CLFC as interested. Aside – I tried to do this but couldn’t - should I be able to edit that spreadsheet myself or not? (I don’t have to - but I’m just trying to figure out what I’m doing wrong.)

@Kirsten - yes, definitely interested. I replied on the other thread, so I won’t repeat myself here.

I’d like to propose that in this issue we package three different issues that continually are raised:

The packaging of these three issues solves a often raised UX issue for producers in a complete way and gives a level of consistency to the UX which would be missing if only one of these was tackled.

In defining potential solutions to this issue there is a forth step to include, mentioned in many places:

This final step is important for GDPR reasons as stated by others above. The UI should allow sharing for customer details on a producer by producer basis.

@lin_d_hop if I read the post above I think we kind of agree that the need is to display the name in the report, not to add customer details in the notify producer email

I propose to close that discussion as seems covered by Hub's suppliers can prepare the invidual orders for the hub's customers we will see there if the notify email needs a new mention about the possibility to see customer details in X report.

Here’s another thought. (This is applicable to a hub setup, since that’s what I’ve been testing.) When an order is placed, the hub coordinator gets a confirmation email. This email contains all of the information any of our producers would need to package their orders. The shopper’s name, their email, their phone number, the products ordered, quantities, etc.

How hard would it be, when an order is placed, to basically use that existing template, and notify each enterprise in the order, as they are placed? Seems like the sort of thing where the data could be looped through fairly easily, and would let enterprises see their orders come in real time - instead of waiting until the OC closes. I think our producers here may even prefer that.

I’m sure there’s far more to it than that, on the code side, but it’s the kind of starting point I’d look at if I was trying to implement it … re-using existing snippets instead of re-inventing things. Thought I’d throw it out there as a suggestion anyway.

I don’t know about this solution @CLFC. Its a LOT of emails - if the details of every order goes to every supplier. In the hub I supply for example - I would end up getting about 300 emails in every order cycle - and only about 5 of them would include products I need to supply. So maybe - if this could be turned off and on - but by default, I wouldn’t vote for such a feature.

Yes, definitely a lot of emails … I’m just trying to think of solutions that could use existing functions, maybe just in different ways.

This is especially relevant to many of the new Farmers Markets that have come on line during Covid, bringing all their stallholders on board, but who manage the day to day operation of all/most of the Producer OFN accounts. These producers rely on emails from the hub to know what to pack. The Notify Producers email is a low overhead solution for Hubs to inform their suppliers, and can be used during an O/C as well as after the O/C closes. However this email still doesn’t provide Customer Names. Many Hubs / Farmers in Australia now spend many hours generating multiple individual packing reports and emailing them to all their suppliers at the end of an order cycle.

The solution recently implemented through #5769 does not help these hubs as their producers rarely (if ever) log into OFN and cannot generate their own reports.

Thanks for re-opening this Emily. AND HUGE HUGE thanks to everyone who helped (over the past 2 years) to bring this wishlist item to fruition. (Unfortunately the hub that instigated it here in Canada has left OFN - BUT nonetheless, other hubs are already finding in useful.)

I’m echoing @EmilyRogers experience with farmers markets. We also have market vendors who don’t spend anytime in the backend of OFN. In fact, they often have to ask us to help them re-set passwords because they use the backend infrequently. The market coordinator (who is often a peer producer) manages their product availability and opens the store. The coordinator sends the vendors a report, and vendors are annoyed that they have to view it on a laptop and print it. They’d rather pack right from their phone - but the excel file is of course too small on their phone. It remains to be seen if these vendors will now go into OFN to monitor their sales/orders - now that they can see the customer names. (Maybe some analytics on this?) But if the notify producers email had the names - at least that would give producers a choice in how they want to work.

What level of complexity is this … basically we are talking about:

If we go with simple - one setting at the Coordinator level that applies to all emails (could even be just a checkbox or selector in the Notify Producers email pop-up), then it really is a case of one checkbox and a reformatted email . . I feel like @Matt-Yorkley would have it sorted before even getting out of bed let alone having breakfast . .

For producers, having this in their email could also work for collections from the farmers market - they just have the list on their phone. Yes they have to scroll up and down but would do the trick

@Matt-Yorkley if we were really clear on what the email should look like could this even be a papercut?

As an aside here - we’ve also had the request from larger more complex hubs that they be able to select which suppliers get notified and which don’t. For these hubs, they are managing some supplier enterprises (so they DON"T want to notify them), and not managing others (so the DO want to notify them). I know its not the scope of this wishlist item - but just putting it here in case it affects how we think about this current step - ie - eventually leading to a next step. (Sorry I haven’t even put this as a wishlist yet - I’m so behind with those)

And now that I wrote this - I have to say, I don’t know why these hubs aren’t just listing themselves as the notification email. Then the supplier wouldn’t get the email. I’ll have to ask that.