There was discussion during the Global Gathering Session on Collectively Maintaining the User Guide about establishing a tool for logging and tracking updates to the User Guide.

Updates are required under the following scenarios:

It was decided to explore using GitHub to log User Guide updates that are needed, and investigate whether it might be possible to integrate this with the way issue logging and the development pipe is currently managed on GitHub.

What Problem are we Solving?

Some topics for discussion:

This sounds excellent to me.
The product and design teams are also implementing workflows in Github to go alongside the Dev pipe, and GH allows us to link all these pipes together. So it makes loads of sense that the user guide updates would be managed in a GH repo too. This means that we can manage the flow of features and fixes all the way through from idea to instructions in the same place, which fills me with some kind of administrative joy.

Who needs to be tagged in this to continue?
@lbwright22 @chez @JessC @tschumilas … and others I’m sure?

Would also be great to post this in the #user-guide channel on Slack to ensure people see it, if anyone in the UG circle wants to do that?

Sounds great to me. In my head I see the process as:

1. Incoming Changes which generate an issue
These will be a number of sources:

2. A member of the UG core team takes ownership of an issue as and when they have time among their other OFN commitments for their named instance.
The issue then becomes ‘in progress: English’

If no change necessary (some releases have no significant user facing changes for example) the issue is closed.

3. The English version of the UG is updated
The page(s) and text/image(s) which have been changed in the English guide are noted.

5. Issue is closed when all translations have been actioned.

I believe that if we move this process to GH, we might want to allow pull request to GH as well? The process would be to review them and merge them if needed. I did that for Leo this week on the Spanish translation.

Another topic but linked: this reminds me that I would like to study the possibility of storing the user guide GH repo inside the main OFN organisation. I will try and test it with the FR guide

If folks more familiar with GH think the user guide processes should be linked there - that sounds great to me. And I just want to remind us that not all instances have paid staff time. And some instances (like Can) have very limited paid staff time - and its all allocated to direct support and proposal writing so we can get more staff time and contribute to the global pot.

So… we need to make sure we allow time and have orientation of some sort so volunteers can enter processes. I"m as concerned about orienting newcommers to our processes than the process/tools themselves. If we are lucky, for example, it will be just one OFN-CAN volunteer who follows user guide updates linked to github, and that volunteer stays with us for a long time. But - it could be that a new volunteer needs orienting every month…

I think @tschumilas raises a good point. We need the process to be a) clearly defined somewhere and b) easy to learn.

The new Support section of the Instance Managers handbook can hold the details so that volunteers can find the information they need to log and action UG changes. I’m happy to write this. In response to Theresa’s concerns, I can’t speak to how easy the GH element of the process might be, as I’m not very familiar with GitHub or how that process might work.

I’m guessing we might create a very simple User Guide Update template along the lines of the below - which would be available to select from when you Add a New Issue in GitHub: 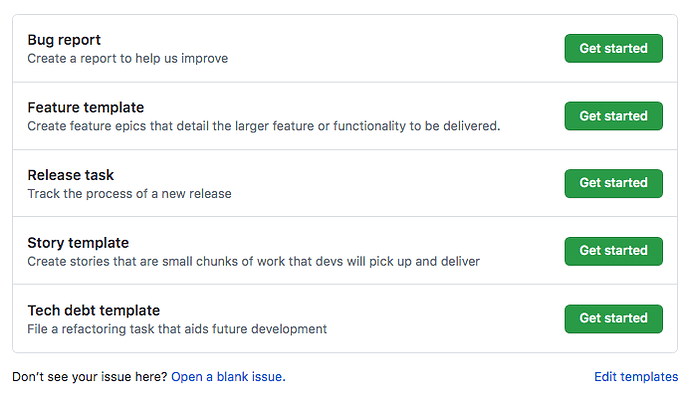 Is this how others see it? @lin_d_hop @Rachel ?

I’m not at all familiar with the next step though, which is how an editor would pick up a task and how it would move through the pipe to completion, as I’ve only seen this from the outside (ie. logging issues, not doing the work).

Can someone else shed more light on this?

Thanks @EmilyRogers for your offer here - I think having the instance management handbook hold the details for volunteers would be fantastic!!

I have written a first draft of the headings / content needed to create a new template in GitHub for User Guide Content. It’s saved in the Global Drive here: https://docs.google.com/document/d/1lcrzX8dwUTdTJk3fY5cWBODmS2Kk_sIdLqgXLAQWyG8/edit?usp=sharing

When you have permissions, you have a section called settings > options where you have a button to generate templates:

My ideal set up would be to migrate the gitbook repository into the OFN github organization. This way we could manage access and permissions all in the same place. I will check this out this week and if it is not possible I will just grant you admin access on the ofnuserguide organization.

Re the workflows. I’m not sure what you mean? If it is creating a board with custom columns, this is where Zenhub comes handy. Otherwise you can create projects within github. An example here with the welcome new dev board: https://github.com/openfoodfoundation/openfoodnetwork/projects/27

When you have permissions, you have a section called settings > options where you have a button to generate templates:

I suspect I may not have permissions. Is this where I should see Settings?

@EmilyRogers you are looking at discourse I think, not github?

Either way, let’s wait for Rachel’s findings on whether we migrate the repository or not.
Before that we won’t know which organization to edit permissions on, right?

@EmilyRogers you are looking at discourse I think, not github?

Oops! Too late at night for my brain here

yes @sigmundpetersen I won’t manage today but tomorrow for sure

OK I don’t see Options under Settings in GitHub either… but I will await update from @Rachel!

@EmilyRogers After a few successful dummy tests. I did a first test with the Super Admin guide. Do you see the settings menu at this link: https://github.com/openfoodfoundation/ofn-SuperAdminGuide---Master ?

No - the last link I see is Insights.

Re the workflows. I’m not sure what you mean? If it is creating a board with custom columns, this is where Zenhub comes handy. Otherwise you can create projects within github. An example here with the welcome new dev board: https://github.com/openfoodfoundation/openfoodnetwork/projects/27

I have only been on the ‘logging’ side of GitHub, and have never participated in the ‘assigning Issues/completing work’ side so I’m making some assumptions here as to what the process would be for logging, assigning, working on and completing User Guide tasks. When I say assumptions, maybe I really mean guesses!

That said, here’s a first cut of two scenarios for everyone’s thoughts:

I’m aware this is very high level and steps are likely missed and - for those familiar with GitHub - some steps may not even make sense! Please let me know where I can refine the process so that it is clear and simple for everyone to engage with

No - the last link I see is Insights.

I’ve created now a UG team in GH with admin access to all guides repositories. Let me know if it works.

Hi all
I have started to take on this work using Emily’s fab start.
Progress:
I’ve created templates for the different type of changes in Github here: https://github.com/openfoodfoundation/ofn-UserGuide/issues

I’m struggling to get my head round Zenhub and work flows and the rest of it. Is there someone from Product who I can arrange to have a screen share with? @lin_d_hop