Can you recommend an open source time tracking tool that the OFN community could use for tracking project time?

@Kirsten and I have been thinking about (and looking to implement for the Aus team) a time tracking tool where we can keep track of work we each do on particular projects or support or other things which we could then use in connection with our accounting software (Xero).

We thought, with the international projects that are on the cards for this year it’s likely that there will be an global team of people working on the development of version 2.0 (so exciting!) and therefore we probably need to think about time tracking more broadly than just within the Aus team.

We almost signed up for a team licence with Toggl (https://toggl.com/) which a few of us use individually and which we’ve been using to track time on the non-OFN related software work the team does. But it costs $10 per user per month to use if you need more than 5 users (20% discount for not for profits). And also, it’s not open source.

So, we’re throwing this question out to the community - have any of you used/are using an open source time tracking tool that isn’t too expensive (or is free for other open source not for profit projects) and would be a good tool for tracking global hours on projects for OFN? Or, if not an open source tool, then an equivalent to Toggl that is more cost effective?

@lin_d_hop @NickWeir @MyriamBoure @CynthiaReynolds, can you circulate this amongst your teams, there must be freelancers with us who are currently using something along these lines to track their hours. Thanks!

I have tried toggl, but find I am not very good at being consistent with it.

Out of curiousity, has anyone been following Colony? They have just opened up their beta: 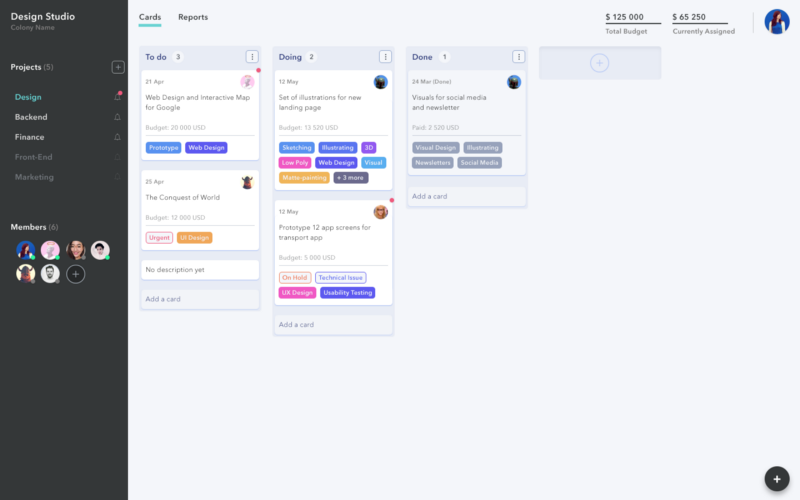 The Colony Beta is for teams who want to create their own “Collaboration Network”—a place to work with, incentivize, and track the contributions of a network of collaborators. It combines task management with “payments” and tracking. This...

@pmackay do you know of anything that we could use? If not please could you ask Jack Townsend and/or anyone else you think might have a suggestion. Thanks

We (Folk Labs) use Harvest, after trying Toggl for a bit and finding it not good enough. Harvest is probably more expensive and also not open source, but they do mention discounts for non-profits. Might be worth asking them for details?

Time Tracking seems to be in Taiga’s whish list or something, but not in their roadmap

Colony sounds interesting @CynthiaReynolds, let us know if you get access

@danielle Have a meeting next week with one of the co-founders, I have been following them since last year when they presented at Oslo Blockchain Day and have been keen on getting access to the beta for multiple reasons. I am working on a ‘project/social enterprise’ that is about to on-board new people, and we want to find a solution that will enable us to take care of the people that join us from the get go. This could be a very interesting way of doing so.

I will know more after we talk - still so much to learn, but my understanding of Colony so far is that they have two solutions:

The future as I envisage it: other applications will be developed that use the Colony protocols - or something similar (which will also evolve being open source) and each of these applications will be able to interact with each other in various companies/ projects/business models and provide solutions that will enable contributors of any given initiative to not only get paid for the work they do, but also enable ‘ownership’ moving forward, such that the value they provide is not lost should they stop working on it. I think of this often when I imagine what it would have been like to have tools like this available from the beginning of OFN, such that those who have contributed so much could still be supported even after moving on in life, because I think we all know that it is not just those who come in at the last minute and are actively involved in a project that deserve to reap the rewards when distributed ownership is enabled.

The application they have developed accounts for role /reputation, accountability, communication, project/team/task management, collaboration and decision making. All in a format that is user friendly (kanban) and apparently easy to integrate in our day to day lives. We are starting to see a variety of solutions like this being developed around the world, and I can’t wait to see what comes to light as we find solutions for the future.

again, let me reiterate that I am totally new to this - but then again aren’t we all!

harvest have come back to me and their non-profit offer is even shitter than toggl’s, 15% if you pay monthly and 25% for the year, and they’re more expensive to start with.

colony sounds quite cool, and ultimately awesome, but more than we need right now which is just ability to track hours for invoicing, consistently for project / budget tracking

i’m reluctantly thinking it is going to have to be toggl until something else comes along . .

@Kirsten I completely agree re: colony for OFN at this point in time, I am working on another associated project that is considering testing it out… (long term vision which I look forward to sharing with you) . Interesting to see what the future holds

https://taiga.io/ looks interesting @enricostn, do you use it? It seems in OFN we use just GitHub and ZenHub which is a Kanban view of Github issues and milestones…but might worth opening another discussion on project management? Or is the way it works fine for the multi-instances agile dev process @Kirsten?

I don’t use it since I work for another project management / kanban / internal communication tool, that actually has time tracking feature but… it’s not Open Source Software

does it have an excellent time tracking feature and is it cheaper? I’m looking at tsheets (tsheets.com.au http://tsheets.com.au/) at the moment, which is also not open source and not as nice to use but will be considerably cheaper to scale if we’re trying to have lots of people use it ($4 per user per month rather than $10-12)

it is with great sadness that I turn our toggl onto a paid package today. I have spent too much time already f#@%@#ing around with other packages, and I could get something cheaper to scale but much clunkier to use. From today Aus team will be using toggl, but to bring any additional people into the same system will need to be considered case by case as has significant cost. We remain open to the appearance of new, better, more values-aligned tools so please post here if one appears . .

Love it, so 'Strayan

This is what we use https://kanboard.net/documentation/time-tracking

Also https://www.odoo.com/page/tour can be interesting if we want to consider a broader integration with Odoo.

Didn’t tryied yet, though

Hi all. In another project, developpers I’ve worked with seemed to enjoy https://wakatime.com/features and its Github integration. However it is really focus on programming tasks, so I don’t think it is possible to use it more generally to trak all time spend on a project.

I don’t know if you saw it, but Zenhub has the feature in its roadmap (a timeline should be given “soon”) and it seems that a lot of users are asking for it : https://github.com/ZenHubIO/support/issues/218

Which made me think : is the Zenhub “estimate” field used in OFN ? And if not, could it be used for tracking time spend instead of estimated while we wait for Zenhub to release a dedicated field ?

Which made me think : is the Zenhub “estimate” field used in OFN ?

We used it originally with the scoping and estimating for the Subscriptions/Standing Orders feature @Rachel, to firstly estimate each issue, and then for the devs to track their time against the estimate (via Toggl).

My initial thought is that using it purely for tracking wouldn’t provide the same breakdown view that a time tracking app does. ie. how would we know how much time was spent developing vs code reviewing vs testing, and if there were multiple people doing each of these things then how do we see the breakdown. For the AU team, we need to be able to see that breakdown because it’s how we pay our people, and also how we know what to charge other instances for our time.

But then again, maybe for other purposes it’s ok…if the detail isn’t needed?