Continuing the discussion from Useability of E2E link management:

##Whishlist:
1- When I create a hub, I automatically get the right to create more than 1 entreprise (entreprise limit = infinity, or 1000 if you prefer). This is also valid is I create a producer profile and when I change my profil to become a “hub”.
(that will avoid any manual action to change the entreprise limit of a given user)

2- When I set up my entreprise, at the end of the different screens that drive me in setting up my hub, I propose to add some screens to accompany the process of linking my hub to existing producers OR creating the producers I want to work with.

3- In the entreprise admin panel, I also propose to add a menu “my suppliers” where the hub manager can see which entreprises he is connected with, and can “add new” either by connecting to existing entreprises or by creating new ones.

Here is an example of what I have in mind for point 2: 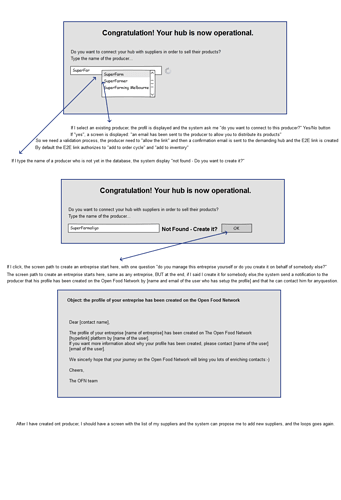 Is it also a need for other instance? @CynthiaReynolds @NickWeir @danielle? @sstead how do you do in Australia, do you manage everything manually so far? For me its a strong bottleneck to scale…

I don’t really have the big picture of where OFN is at worldwide. From my small local experience trying to automate this seems to early in our evolution.

Ok, maybe we can start only by removing the barrier of having only 1 entreprise creation capacity by default (avoid a manual process to allow someone to create the entreprise for the producers of a hub).It’s just that I see myself explaining a lot of time that “once you have set up your hub, you need to write me a message so that I can give you the right to create the enterprises of your producers”… This never happen to you @NickWeir when you have new users setting up a hub?
We could at least remove the barrier to create only one entreprise and say that by default a user can create 100 entreprises (avoid to have to intervene manually at any stage…)
What do you think?

yes this happens for us. but we are not setting up lots of hubs and it is not much work to set them up manually. also I like to know who is setting up a hub so that i can keep an eye on them

Sorry @MyriamBoure, I’ve nothing to contribute to the conversation. @sstead is the one that deals with this kind of stuff, I just manage the pipeline of dev work

Thanks @MyriamBoure. The 3 wishlist points you have described above look great!

We agree, getting rid of the >1 enterprise rule would be good.

In Aus, the vast majority of our hubs don’t link to existing producer profiles, but instead create them themselves. Default E2Es are created for this type of user allowing them full control over that enterprise and the products, so it’s not a big problem for us. But what you describe would certainly be nice, for the rare user who does want to stock products from an existing producer. It will be a bit of a challenge describing the E2Es to the producers and asking them to grant permission. Especially if a producer just has a profile, they might get confused when someone asks for permission to add to inventory etc. But this can be overcome I’m sure.

Often the supplier is a large wholesaler (for items like nuts and dry goods). In this case there is no real need to send them an email saying ‘a profile has been created for you’. So I would perhaps have the option of sending such an email.