Set up a producer abroad from a specific instance

Hi there!
Following the discussion and work started with @RohanM and @maikel on internationalisation (http://community.openfoodnetwork.org/t/internationalisation-project-notes/312), here is another issue we are facing:
We have an international buying group in France who buy directly from producres in Italy… but when the set up is done we charge the localisation files from France, and it’s impossible to create an entreprise with an address which is not in France! How can we go beyond that problem?
We want to be able to see the small trucks in Italy with the description of the producers

When I write the address, I can select the country that I want (in that case I’m in the Norwegian instance and I want to create a producer based in France), but the “region” field is still with the Norwegian local data: 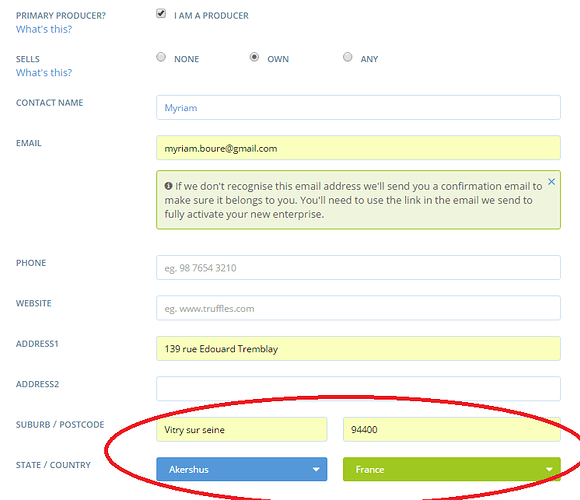 An here is the error message that I get:

Thanks for your input!
Ping @marito59 aad @Selmo

A developer should be able to feed Italian states into the database. The initial setup was done as describe in the deployment wiki. You will need a states.yml for Italy and then import that into your database.

Oups, thanks @maikel, I guess @marito59 knew that, sorry I asked too quickly! But the good thing is now that the question is on the community forum no one else should ask… hopefully

I want to make sure I understand @maikel and @MyriamBoure. A potential hub asked me the other day if they could enter a supplier to their hub from the US, and I said no, that OFN was only for Canada.

But - if this hub wanted to pursue this, and had one or two US suppliers - does that mean is is possible for a developer to ‘feed’ the relevant US states into the database - and then these suppliers would show. (I understand that we would still be doing all the transactions using metric weight (vs US imperial) and volumes, and Can dollars - but maybe that is not a big problem to convert.

So would it be a possibility if there is a hub that wants this? or are there other problems?