Scoping a Feature Candidate in an Inception process

Scoping a Feature Candidate, aka. running an Inception

This step in the process takes a prioritised Feature from the Product Feature Backlog and turns it into a fully scoped, defined, designed, and documented feature that can be added to the delivery train.

The process to do this is called an Inception.

You can read about the theory of Inceptions here:

And here is an outline that @danielle has used when running inceptions: 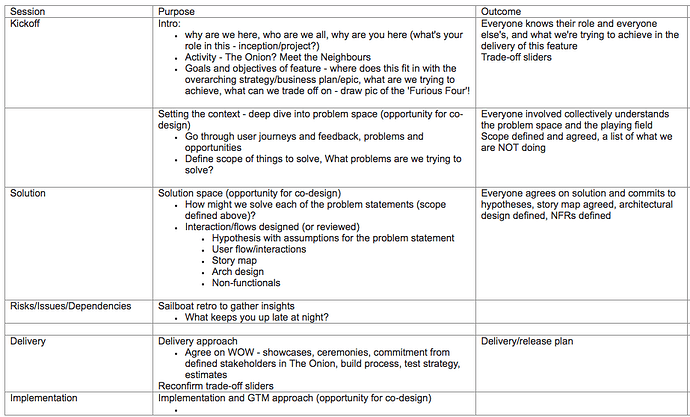 For the people coordinating the Inception (which should be one Product Owner and one Lead Developer), they should ensure the following has been done as part of the scoping process:

Those leading the Inception process should write up the results on the community boards so that everyone can see what the scope of the feature is (and then look at the items in GitHub if they want deeper detail). Here is an example that @myriam did as part of the first “official” inception ever run for the OFN.

If you’re running an Inception and you want some help from others who have done this before, then get in touch with @danielle or @MyriamBoure or @Rachel or @enricostn or @sauloperez who can help (and are likely to be involved anyway

Happy to chat about this more and make sure what is written above is as useful as possible for people to run with.

Thanks @danielle ! I think I need more practice to fully understand inception. Maybe “delivery note” or “cookies” could be some good occasions to practice, I will probably come back to you to ask you more advices and help on the way

Actually, I think I really would like to participate to an inception session that you would facilitate, it’s always easier to do something you have seen before… and you are my Yoda master Danni

I’ll come back to you to see if that would be possible for the next one.