Pay What You Can Business Model

After extensive exploration, feedback and understanding of the role of platform coops in this crazy ole’ world UK are exploring a ‘Pay What You Can’ business model.

We are very aware that we need to be financially viable so we need to implement this in a way that:

It is super important that we don’t annoy people on the donations asking because that really makes people less likely to donate. So the above are important to think about from the start.

Ping @NickWeir @Sara @mags @MyriamBoure @pmackay @danielle If anyone knows of anyone with experience in these matters could you ping them too please?

I think targeted and timely asks are what we want, rather than a blanket ask to all users as this is more likely to get ignored as people assume someone else is dealing with it. So my inclination would be to say that;

This will mean that organisations running more than one hub will get asked to donate twice, but currently this only applies to Tamar and I would imagine will only account for a relatively small proportion of enterprises in the future. And if you’re running two or more shop fronts on OFN, I don’t think it’s unreasonable to be asked for a donation twice. If we were using the 2% of turnover model they would have to pay 2% on each shop front anyway.

On a wider point, the wording and the positioning of these asks will be key - as you say it’s important we don’t annoy people, but we also need to make folk aware that we’re not a charity and we (will eventually) rely on these payments to keep the site going. So I’d be inclined to not call them donations at all - could we call them contributions or payments whilst still getting across the Pay What You Can ethos? Although these payments are voluntary, we want people to feel some sense of obligation to pay them if they can. It would be interesting to see what language other businesses are using that have a similar model.

And a couple of other questions about this model;

I agree let’s not call it a donation, contribution would be better but people need to be clear as to what they are contributing to or for, we all like to know how our money is spent.

We could have a minimum as well as a suggested contribution? Even if it’s as little as £1 a month, this will give everyone a sense of ‘belonging’ to our OFN community. I think there is a fair amount of psychology in this approach, as one of our Directors said today ‘It’s very seductive’ So this is a way to draw people in as well as support those who are working on very tight margins or in areas of food poverty. The £1 could also represent a Membership Fee? Its also much easier to increase a regular bank payment rather than make the effort to set up a new one from scratch.

Could tactful reminders or suggestions for increases in contributions be triggered by turnover in their shopfront? I agree we also need to be asking the right people but I’m not sure how we identify them!

hey rushing to another thing but probably good to connect this to the collective income platform thing @myriamb was looking at?

i agree with all of Mags’ points above.

i think we should offer hubs the option to have a free trial but not put a time limit on it. instead i think we should be clear about the platform co-op system up front and ask them to start contributing as soon as they are able. i like Sara’s idea of triggering reminders as their turnover goes up. maybe we could do this manually to start with if this is tricky technically.

in terms of a payment gateway could we give people various options including setting up a regular bank transfer?

@MyriamBoure please can you tell us how this could fit. thanks

Where does this make sense within the admin interface?

Hey @kirsten. Love to discuss this platform collective aspect further (upon your return I presume). I have included you in an offline discussion also.

This all sounds very sensible to me. I’d think at this stage we don’t need to spend dev time on a fancy feature in admin but OFN UK (Nick I assume) can keep in touch with enterprise owners and when it feels like they are committed fully and have a turnover they can be asked to start contributing.

You can also consider taking Direct Debit payments via GoCardless and if at any stage Sara decides to move to Quickbooks Online, it will even link automatically into your bookkeeping.

We are experimenting a different model in France as we have chosen to ONLY go for volunteer contributions (for the moment) so we don’t have any trial period, and we never say either that the platform is free, we say that it’s accessible on a volunteer contribution base and we explain how we work to people.
The first experiment we are running on this “gift economy business model” are super positive, I need to write a post on the French feedback as it can be interesting also for the community.
But basically, we have decided to avoid having commercial activities (and employees if we manage) in the non-profit and “Commons” area, and build a network of “providers of the Commons” that can invoice clients directly (and give back to the Commons).It makes the “non-profit” mission super clear and enable us to get tax reduction of 60% for people giving us money. we probably will create a commercial entity at the end that will be owned by the non-profit.
So we are experimenting various models now:

In all those three cases, I just have spent time explaining the whole project, the values we defend, how our Common is governed, and both for my work in supporting them and for their contribution to the cost of running the platform (servers, admin system maintenance, contribution to the global mutualized tasks, etc.) I explain the work done and let them the choice of how they want to contribute.

So, sharing that experience, I’ll answer your question above @lin_d_hop

Which payment gateway?
From my investigation, the best option I have found for France is called HelloAsso (which is a zero commission platform with both one shot and regular contributions, and a design encouraging people to “give a tip to the platform”) not sure there is an equivalent in UK but worth investigating!
On international level, the best option for me remains Donorbox. I had (with @Kirsten also) discussed with OpenCollective but I’m not convinced by their model to be honest, it’s very expensive, there are so many options now with super low commission…

Where does this make sense within the admin interface?
Should donations be between user and instance OR enterprise and instance?
Should a user be asked for donations for all their enterprises?
Should managers and owners both be asked?
Sould each manager be asked regarding the same enterprise.
I would suggest to have a button somewhere on the main page, but I’m not sure any money will come from there, as people don’t ususally enter the site by the main page, but by a shop.
Maybe a model like the Loomio one could be interesting. in Loomio, you can use it for free and then Loomio can ask your users to give money. Or you can choose to pay a monthly subscription (they have two offers) and then no message is sent to the members of the Loomio group.
In our Case A, there is a design issue today: to ask the members to give to Open Food France, the hub manager created a product called “donation to Open Food France”. But why HelloAsso, which has a similar model, works? Because they have designed the “tips” process. So ideally if a hub choose that model, we should have a step at checkout where we add a given amount or pourcentage to the global amount of the order and let the user change this “tip” if he wants. See the 9,60€ on the right, that’s the tip for HelloAsso that you can change. So we can design a default tip but let the final buyer free to change this amount. 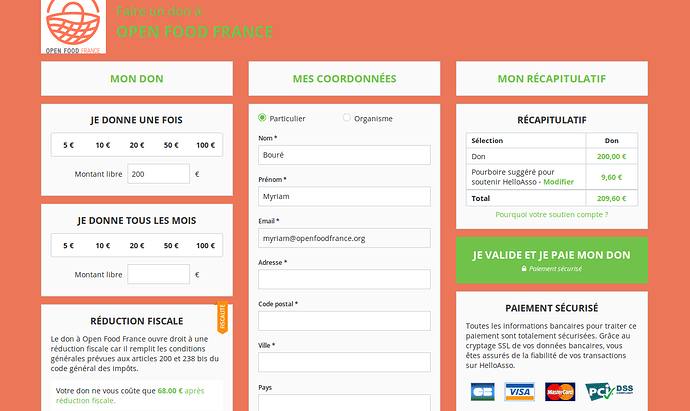 This model is really super efficient, people are free to give nothing, so they are happy to give something!!! HelloAsso ONLY work on that business model.

If a hub doesn’t want that we ask his members/buyers a tip, then he can pay a monthly fee (see instance business model)

Here are my thoughts