What is the purpose of this session?

Do we want to review / establish our 12-month priorities? 6-month priorities?
Actual pipe? … noting that we can’t really do this until after the technical sessions on performance, security, etc.

What outcomes/deliverables do we want?
12-month priorities, maybe also 6-months

Who is facilitating? Kirsten

Who is scribing? Gen 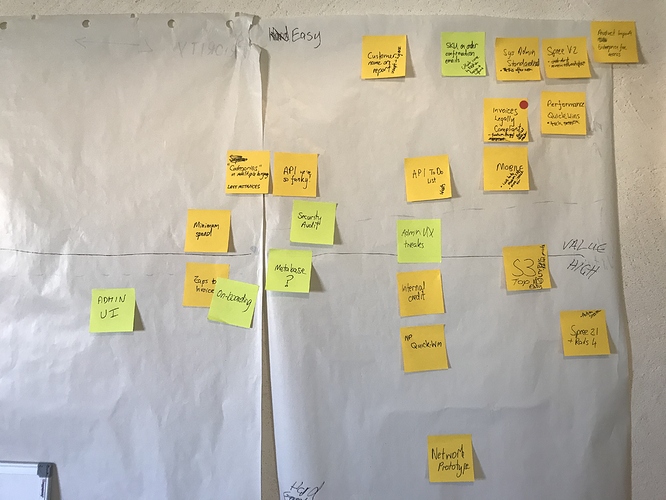 Maikel asks what are the deliverables we want on the tech side. Kirsten responds that we won’t know until we know our priorities. Lots of resources have gone into the Spree upgrade, so we need to pause and think about how to best use dev resources going for the next period.

Lynne asks whether the pillars are necessary for planning work. It seems that the work often comes first, and subsequently it can be fit under one of the 4 pillars. Some dispute on this - e.g. necessary to prioritize performance over some other objectives. Rachel suggests that right now we’re mixing building a roadmap and building an action plan. Luis argues that the roadmap should be prioritized by return-on-investment.
Rather than starting from the existing pillars, maybe we should start organizing our priorities from scratch? But most of the room is confident we’ll land on the same pillars.

Mining things already on the list, brainstorming what else needs to be here
Added: Network prototype, customer name on report, minimum spend, internal credit…
Luis: Performance is not just one thing - bulk order management, shop products list, reports, front-office, order cycle, bulk product edit - to be discussed further in another session
Rachel: Not only performance, also UX
Matt points out that the free two-week trial of the security check might flag issues to be addressed urgently. Francois suggests this should happen after the upgrade. Kirsten suggests that even if the free trial is only available right now, it might be better to wait until the correct moment to run it, and just pay later (if it’s only a few hundred dollars - to be checked)