We are trying to use the Norwegian instance for a Swedish pilot and in December we were able to add Swedish states and choose a Swedish address for the enterprise. But after upgrading from 1.8.5 (I think it was) to 1.8.7 we are only able to choose Norway from list of countries, see image. 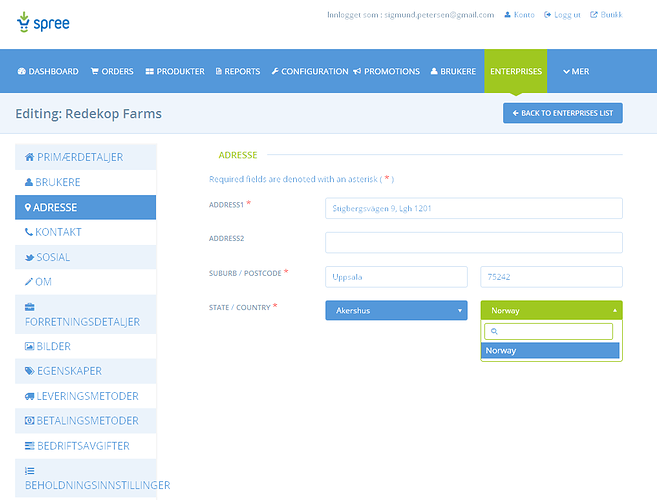 The Swedish states show up correctly in the configuration. 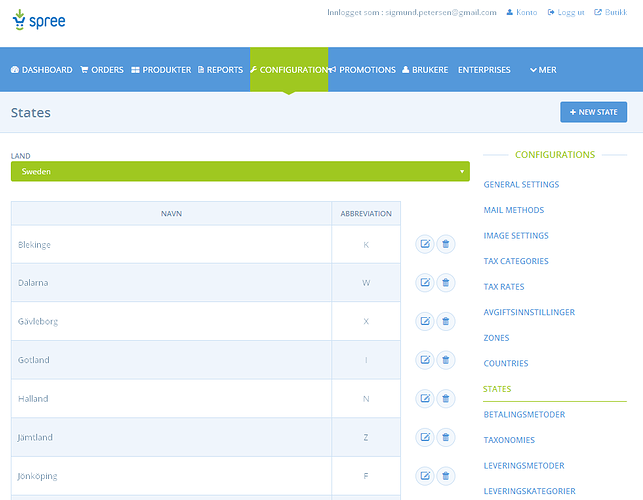 Anyone know why this might be? Something in the latest releases that has limited the choices in the dropdown box?

@MyriamBoure do you know if you have the same issue in France?

@oeoeaio would you know anything about this? Do you think it’s a configuration problem on our side or should I create an issue on github?

Ping @maikel as well, just in case he has some thoughts on this

Might there be something about the zone setup? Maybe something changed through the Spree upgrade steps. I haven’t changed anything in that form.

It seems we have the same issue in France, @sigmundpetersen can you open an issue on Github? It’s super annoying for us as well, our biggest user is based in Spain :-o

On staging in France we have the Italian local states imported. I want to create a new enterprise, I can select "italy’ in country menu, but the states don’t update, so I can’t select a state, so the address can’t be found. So the problem seems a bit different than the one you mention Sigmund, I still can select “Italy” as a country apparently… but “AIN” in the example is a French state.

Is there anything merged already about the “display country with states” stuff, @Matt-Yorkley nothing can come from that end? Any configuration trick to know now?

Hi all, I raised this with the AU team today at standup and we want to fix it but we need to figure out how to pay for the work to be done investigating the root cause of the problem and then fixing it.

@Kirsten pointed out that this is a core code task and should be paid for by the commons, however looking at the cobudget bucket that covers this work there is a funding target of over $4000 but the only amount pledged at this point in time is by the AU team for $800.

So, I wonder how we can fund this particular bug fix, and others like it moving forward?
Ping @MyriamBoure, @sigmundpetersen @CynthiaReynolds.

@serenity will be adding a discussion around this to the global hangout that we’re having next Monday/Tuesday. Let’s see if we can solve it then!

@danielle I can’t say for now for France, we have started lots of actions to raise funds through foundations, etc. but for no we don’t have any money and nothing sure to expect, so I am not sure… I can ask the Spanish user if he can pledge 2-300€ to this, but it’s a bit annoying to have something that as working and now doesn’t work anymore, and have to ask a user to pay to have it work again, I don’t feel so comfortable… but I don’t see any other possibility for now regarding France…

@danielle and others I closed the issue on Github https://github.com/openfoodfoundation/openfoodnetwork/issues/1520 as Rob gave us an explanation that helped us identify the origin of the problem, and we have a workaround.
I opened a new issue to improve the process but that’s lower priority : https://github.com/openfoodfoundation/openfoodnetwork/issues/1538

@sigmundpetersen if you have another issue please open an issue on github. We did the upgrade on production and all work mostly as planned for us…

Yes thanks @MyriamBoure for testing this. I will have to investigate further on our instance to see if this is just a specific user problem for us or a general issue.