We have been using v1.2.1 and I think we are now at v1.3.0-pre1 and we are still having this issue: over some limit number of products it is not possible to check-out via the cart anymore, confer attached screenshot. Has this issue been confirmed as resolved? 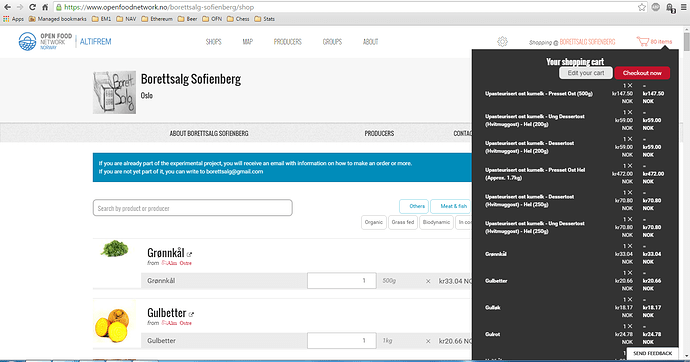 try later release? v1.3 (https://github.com/openfoodfoundation/openfoodnetwork/releases/tag/v1.3.0) should definitely have this fixed w buttons repeated at top as per image below 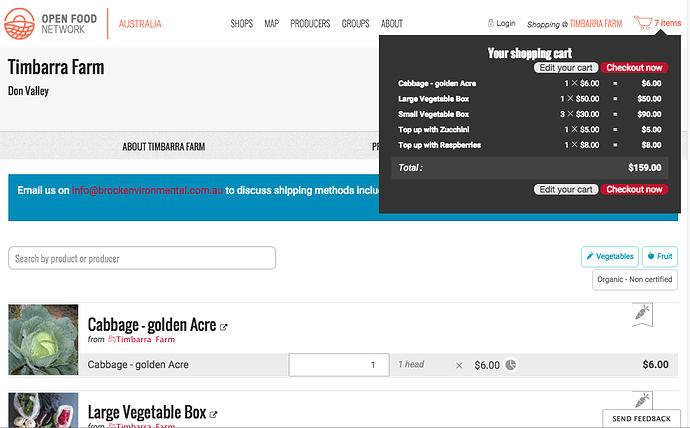 pinging @danielle, who will be in touch with you @MyriamBoure @Olivier and @sigmundpetersen about best way to manage norway issues

just looking at this again - this really should have been fixed ages ago, which makes me wonder it it is connected to the other weird thing that @RohanM is looking at (when he’s back in Jan) on the add to cart . .

Summary Adding products to cart on the Norway server has been slow for a while now, and recently had a more detailed look into it. We've been considering whether the server hardware was slower or that the older version of OFN (v1.2.1) was at fault, but it appears that there's a software bug related to the currency that the server uses which makes adding a product to cart an order of magnitude slower. I'm part-way into tracking down the cause, and have yet to design a solution. It's possible tha…

Have been speaking with @RohanM about this issue today.

His opinion is that this is current expected behaviour (unfortunately), as there was no design solution put in place for when the list of products displayed is longer than the max. height of the cart pop-over. The user can still proceed to checkout, or view their cart via the top buttons in the pop-over, however there is currently no scroll bar or elegant way of dealing with a pop-over that is longer than the available screen height.

@Kirsten keen to hear if this is your understanding? If this is expected behaviour then it’s a fairly poor user experience (which could cause the user to bounce), and one that we should add as an improvement in the backlog.

Actually we do see the repeated button on the top. We are not “stuck” as you say as we can proceed to checkout,
but as @danielle mentionned, when the list is long the user experiment is not so good, it feels like there is a bug…

So I doubt there is a link with the poor performance that @RohanM identified as linked to the currency thing… the fix you implemented actually works also for us.

OK, so I’m going to add this as a bug in GitHub, and it will go into the core backlog. Not sure when it will be worked on, but we’ll have a look at this one alongside of all the other bugs that are in GitHub and see what it’s priority is compared to the other work we have

Scroll bar has been added to the shopping cart, now in Aus production.

This issue has been fixed, so I’m closing this topic