This is Phase 2 of the feature that was originally called ‘Enterprise Accounts’ but was renamed to Enterprise Index Rebuild. It is also related to Business Model Configuration

Basically a tabbed interface, making the related but distinct aspects of user account management easy to switch between. 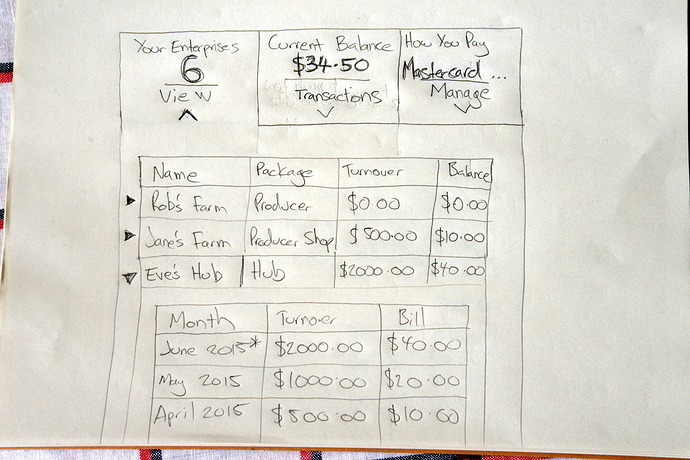 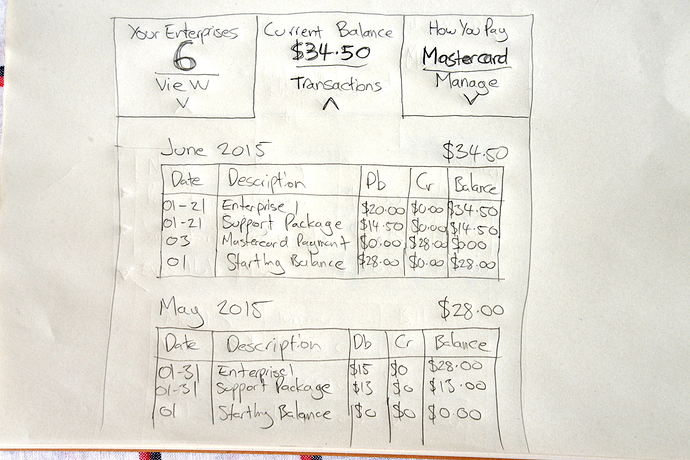 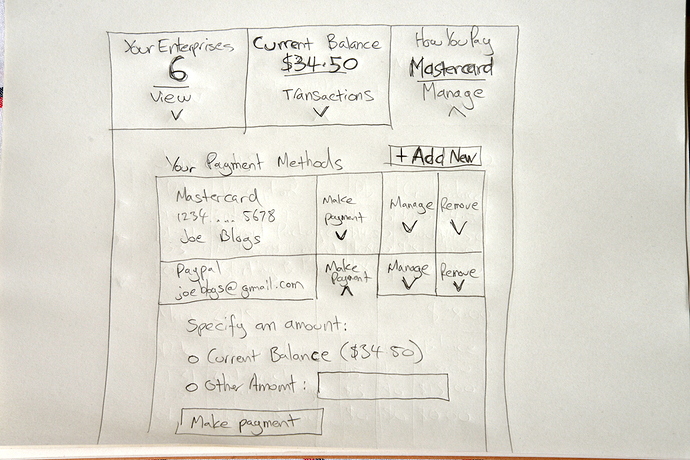 looking good!! some thoughts from me

have a few more comments but need to run to meeting . . for payments we can perhaps simplify for this version e.g. we don’t actually have facility for mastercard etc

Part 1: Creating a structure for instance-level rules who gets charged how much and for what

Part 2: Tracking changes to enterprise attributes that are relevant to payments

Part 3: Calculating how much a user owes

@Kirsten, just a question, this “overflow” tab would appear only if the business model of the local instance include this feature? For example in Scandinavia we have not planned that, we thought we would just charge 2% on all the transactions… so we may not need that feature and it can be confusing if it’s there and 0.

my god @oeoeaio I think that’s utterly brilliant - then everything we do to improve order management, prinint and resending invoices etc just gets passed through. And we can just use the same invoice reports if we want to extract the invoices into separate accounting package.

You are a genius.

Tax: as far as I can make out, all services that we are providing as OFN Aus do attract GST. Especially given recent rulings on Uber and AirBNB etc, I think we’d just be creating future trouble for ourselves to try and avoid this. I’ve got some recent detailed advice from my accountant about GST that we are going to have to retrospectively put into the shipping calculator (urgh, will update info but not wanting to hurt @RohanM just yet). Key immediate question for us is whether the $50 cap (for example) is inclusive or exclusive of GST - I feel that we discussed this with board or management group but can’t remember the outcome - @serenity or @sstead can you remember which way we’re going to do this?

Either way, is probably a matter of setting up in the configurability whether the ‘fee’ includes tax or not, and which rate, and if it’s going to be done as order adjustments anyway, this can all probably just be copied from the way @RohanM has set up the tax on fees?

I also wonder if doing things this way, would potentially open up more easily future implementation of @MyriamBoure’s ideal of having the OFN fees just applied in the order. So if they go with flat 2% to everything, that could actually be added on as a fee that goes right into the shopfront - not something we have to deal with now, just noting

@MyriamBoure see Rob’s comments above - we won’t be doing it at the outset and when we do it’s all in the context of configurable by instance, and then by enterprise

My foggy memory is telling me that we said 2% or $50 exclusive of GST.

OK @oeoeaio, just trying to work out where we’re at with this, with a view to handover to @RohanM while you’re travelling. Notes below outline what I think we have in place (and some questions that arose while working it out)

As Super-Admin, I go to Configuration/Accounts & Billing and:

Then I go looking for what this has done. I can see that in admin/account I now have entries under each enterprise that I own, but I cannot see anywhere where this entry is not zero - even where I think it should have a value, so I think this isn’t yet done

I can’t see any creation of orders under my Account Administrator Hub (may not be critical in Phase 1) . . not sure when this would happen either, probably best not every time someone hits ‘Update Invoices Now’ without a warning . . or will this be an auto-job at end of month?

okey dokey, following talk to @oeoeaio and @RohanM, this is what we’re aiming to complete in this iteration (phase 1), ideally by end of this sprint (29th July)

When do invoices get sent?

NB. This new invoice mailer can/could be used as the basis of the system-wide invoice generation and emailing system. So if @lin_d_hop is working on that (now or soon), she and kirsten should make sure on same page

Are these all the tasks? and who is doing what?

minor thing - @oeoeaio and @RohanM - can we do database backup and reload next time we push, i just lost my accounts admin hub and set-up. Setting them up again, but annoying if i have to do each time

erm - so have just pushed the new version and reset up my accounts hub and some test orders for July etc, but now I am getting this (img below) where yesterday I was getting a list of the enterprises i own and a line of info on them? @oeoeaio

Seems to be working for me with current production data?

My only thought is that you had probably run the Update Invoices job on the same day as you created the orders, and so they wouldn’t have been picked up because the job only looks up to the previous midnight (when it is set up to run automatically it runs at 1am). Maybe try running it again and see if it picks up you orders from the other day now?

Note that invoices are only created for users that actually need to be charged, and items are only added when the turnover is > $0. Therefore enterprises with trials will appear on invoices with a bill of $0.00, but hubs that sold no produce or producers will not appear as items on invoices. My thinking around this is that it would be better to not flood the system with a bunch of empty orders and adjustments. This setup is easy to change if it is not the desired behaviour.

Your list of things in post 10 looks pretty right to me. My feeling around notification of job completion is that it is not worth the time it would take to build the infrastructure that would be required to live update the status in the page. Note that you can manually refresh the page, and if the “In progress” message is not there, the job is done. Considering that the intended usage is to set the job up to run automatically in the early hours of the morning, I think this is probably sufficient for our requirements for now. Perhaps I could add a sentence after the “In progress” block which tells the user that they can refresh the page to see whether the job is finished or not?

ok, so the next day thing would have been the problem last time. But now I am trying to do it and it is telling me that the task is still running (so I can’t do the generate invoices step), although it started at 1am (and is now 1:37pm) - so something must be stuck? am on staging1 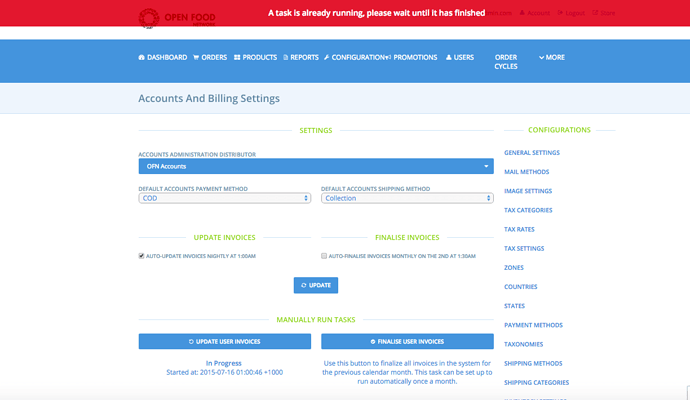 Assume it is because it hasn’t completed that I’m not seeing account info for bulk foods, which I should because I placed some yesterday?

@RohanM - think this is probably starting point for you to pick this up? I cannot see what else we need to do until that task completed and I can have a go at generating the invoices. Grazie

The delayed job runner wasn’t running on staging1 for some reason. I’ve enabled it and the update user invoices job seems to be running now.

cool. so now I’m trying to do the next step and generate invoices. This only happens for the ‘previous calendar month’ and annoyingly I don’t have any orders for June so I can’t see what it’s doing!!!

@RohanM could you please finangle the orders in the screen-grab below (in staging1) so that they are all in June, so that we can identify what this step does!! Thanks 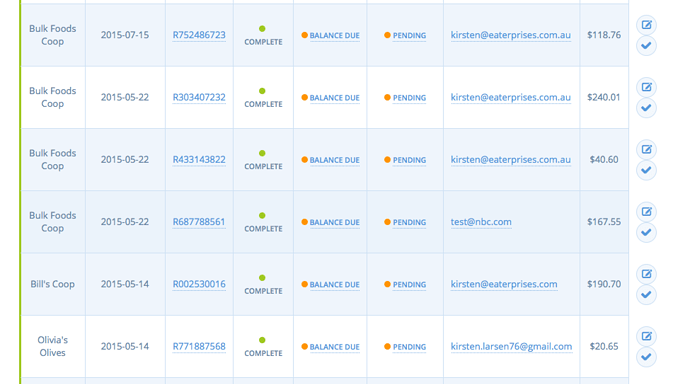 All done, how’s that looking?

okey dokey, so now we are in action

When I am logged in (staging1) as admin@openfoodfoundation.org (the accounts distributor), I can now see two auto-generated orders, which have the correct info in them - yay! 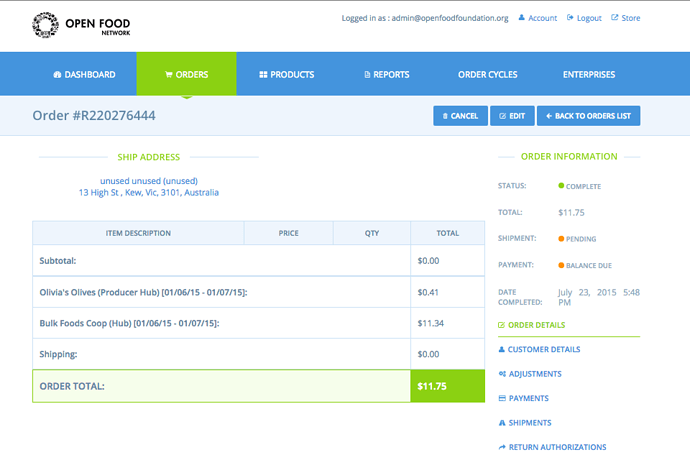 So the next steps to get this to be useable seem to be:

1. WHAT do we email to customers?

Whichever way we ‘call’ the email generation, we still need to work out what is actually emailed, as most likely the standard order confirmation email would be pretty confusing. At the moment I can’t see what it actually does so is hard to specify differences.

I started filling in thoughts about this here and realised it needs a page of its own, so please pick up conversation here

Option to print to pdf as well

I am hoping that we can do this by making the fee types used to create the adjustments ‘GST inclusive’, just like we’ve done for other fees, but need to set somewhere different I expect. And then we will also need to adjust the actual rates so that they are 10% higher (e.g. 2.2% and $55)

Then hopefully the GST should just magically work, although we’ll need to pay attention to the invoice template

Hard-code vs fields in config

3. How do we generate invoice emails to customers?

We had some discussion about this and agreed that for now they certainly shouldn’t be automatically emailed, but we need to either

@oeoeaio @sstead - would we consider this to be testing? or done?