How to get your local OFN platform up and running?

Continuing the discussion from Building your OFN group or organisation in a new country:

This topic is especially for non-technical people who want to understand how they can concretely get the platform up and running. Maybe you don’t have yet a developer in your team to explain you that / lead that, so here is our experience from Norway, and what we learnt from it.

“OFN is open source, so any developer can basically copy/paste the code (which is on Github here) on a server and run it.” Ok, that sounds simple, and it is a bit like that, but maybe not so simple

I’m not sure I have understood everything, but here is my understanding, from a non-technical point (even if you are not a tech, it can be good to understand the IT):

Here is a first try to describe the IT architecture: 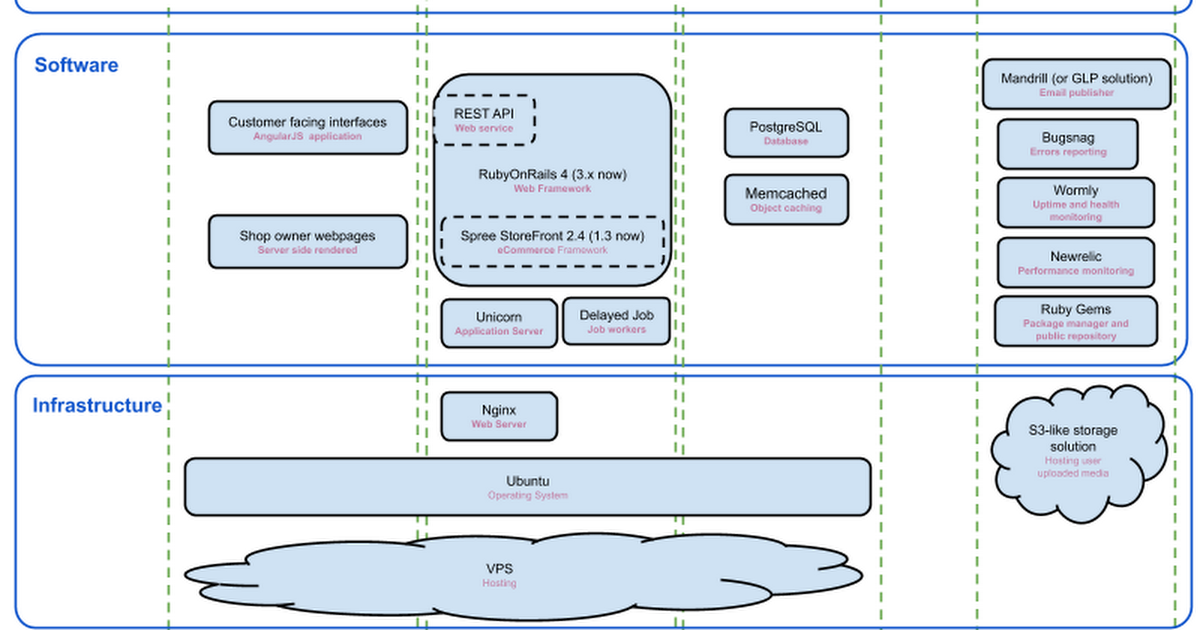 
Please have a look and change whatever need to be change! Ping @openfoodnetwork
I guess this architecture may differ from instance to instance.

2- Why having seperate local OFNs?

in Australia, UK, Scandinavia… the local OFN are running on different “instances”. That means basically that each region manage its own server and put the code on it, and build the governance around it. It may seems a bit less efficient, as we need to redo the installation job everytime, but here are the main reasons why we have chosen that strategy:

3- Having a first version to test and demo

In Norway, we started the project without technical skills in our team. So in order to have a first version of our local platform up and running, so that we can demo it to people and start showing what it would like for Norway, we asked the international community if they could do that first install for us, without customizing anything (or just the location so that we see we are in Norway). Not everyone can work for free all the time, so we paid a little bit the Australian team for that, but it was really a small amount of money so we were able to put some personal money (being confidend we would pay ourselves back when we have money in, which happened!)
To do the install for Norway, we needed to buy a domain (we couldn’t buy a .org.no domain, not allowed in Norway, so we bought the openfoodnetwork.no) and an SSL certificate. After some investigation, we choose the ssl.com basic SSL (49$), and it worked well. We had a bad experience with StartSSL, the free SSL didn’t work for an “e-commerce initiative”, and we tried the paying option but they didn’t want to validate the domain as the name of our organization was not Open Food Network (the local non-profit is called Altifrem).
So with that, we could have our first version and start testing it and playing with it

[Of course if you have tech people in your team, you won’t have to go through that step, they will directly install it locally]

When testing, we of course discovered some bugs, or features to adapt for the local context. So we created a “Milestones” on Github for Scandinavia and started opening issues. For those who don’t know about it, Github is a library where all the developers people share the coding files. So if someone develop a new feature within the OFN repository, everyone can access it and install it. So it’s a tool for developers to coordinate, manage contributions, and compile them.
And we started opening and contributing to discussions on Discourse.

But we soon realized we won’t move forward if we don’t build a local community around the project and have involved developers locally. First because we didn’t have money to pay other people to do it, even within the community, and then because everyone is very busy already with trying to get their own local instance. So we started talking at open-source developers gatherings (conferences, meetups, etc.) and we launched a “call for developers” 1 min video on facebook (https://drive.google.com/open?id=0B_HDFsX1e_2Vcm9FOUlxQ0R2WDg&authuser=0)
And that worked!

5- Take over the server and move forward

The next step was to “take over” locally the installation that had been done for us by the Australian team. The install had been done on the Digital Ocean account of the Australian instance, so we have to transfer it to a local one. There are other technical things I didn’t get, but the tech people talked together

The technical environment is described on the Wiki on Github
The idea is now, we will have our local team of developers, with one of them taking the tech lead, and they will be able to work on the specific bugs we will have on our local instance, do the dev job for the features we need locally (like adapt the language, the VAT, some wording, some API with local payment systems, or accounting systems, etc.) and of course contribute in the permanent improvement of our “commons”

3 Likes
Open Food Network in Spain and in Spanish : )
Introducing a US-based For-Profit Potential Partner
Who are we? I want to know the people behind the names :-)
MyriamBoure June 10, 2015, 6:09pm #2

@Kirsten I will work on that this weekend, on google drawing, and put it in with the link so that we can also update the IT architecture if needed. But as I described it to the French people starting to work on it, I thought I would write that down

If you want to add anything/update, it’s a wiki!

yes, thank you so much @MyriamBoure! this is a huge help! a very simple, thorough explanation of how to set up the current OFN model in your own country.

3- Having a first version to test and demo

Hi guys, I have a bit of technical question. We’re about to go online with an ‘OFN Brazil’ demo version, but we are working on our own GitHub repository right now. Should we make a pull request on the OFN Github and work within that repository instead?

I haven’t found an answer for this in other topics, so I thought it was a good idea to ask here. Please let me know if this is already clarified somewhere else!

@thomaz it would make sense to work directly from the main OFN codebase. It should be configurable such that this is feasible (and is what most other countries are doing). Also if you find issues its more likely they will get fixed in the main project and benefit everyone.

Coud you post a link to your repo? What changes have you made?

@pmackay Yes, that makes sense. In the beginning we didn’t know whether to work as a ‘white label’ version or as a OFN instance, that’s why we forked the code. But since we decided for the latter, working from the main codebase is the best path.

We didn’t make any major changes, except for language and some images, so I guess we’ll just erase the repo and make a pull request from yours. Here’s the link, in any case: